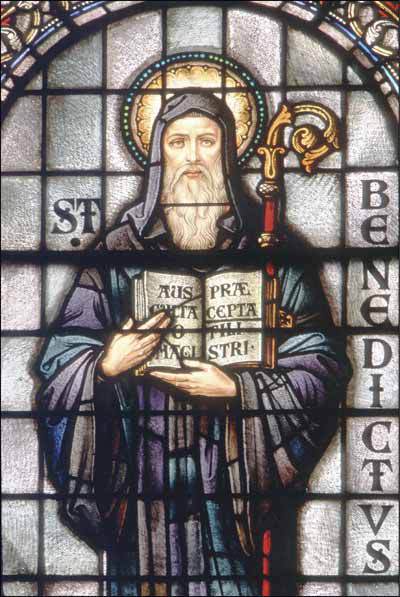 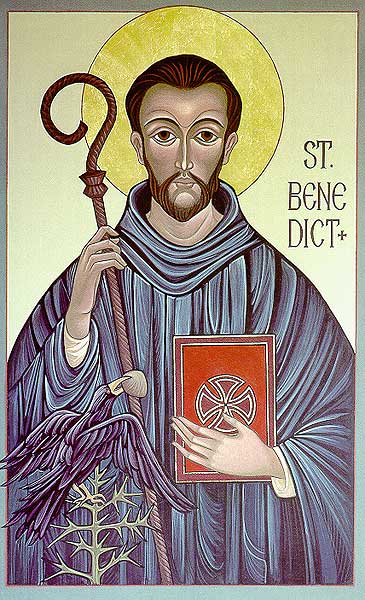 St. Benedict the Abbot was the founder of Western monasticism, the author of the famous Benedictine Order, and the patron saint of Europe. His attributes include: a bell, cup and serpent representing poison, broken utensil, crosier, and raven.

St. Benedict, twin brother of Scholastica, was born in Nursia in central Italy. When he got older he left for studies in Rome but was so distressed by the immorality of society that he ended up in Subiaco where he became a hermit. His faith never faltered and he soon gain followers who were in awe of his spiritual knowledge. He organized them into twelve monasteries; there he performed many miracles. He found water on a desolate mountaintop to quench the thirst of his monks, retrieved a bill hook’s iron from the bottom of a lake and rejoined its handle, prevented a monk from leading a dissolute life through intervention, and made another monk walk on water to save a young man from drowning.

Although his followers loved him, others grew envious of him, a jealous cleric an attempt to poison him, which is now symbolized by a snake coming out of his chalice. He is also often depicted with a raven that is said to have carried away a loaf of poisoned bread that a jealous enemy had sent to him. With this final poison attempt, Benedict left and took a small group of monks to Monte Cassino where he wrote the final version of his Rule. In it he emphasized authority and obedience, stability and community life. His monks’ primary occupation was the praying of the Divine Office in common, reading of sacred texts and manual work of various kinds.

Benedict remained in Monte Cassino the rest of his life. He never became a priest and never intended to found a new religious order yet he influenced the growth of both Western monasticism and Western civilization.

He died on March 21, 550 and was buried alongside his sister whom he would meet once a year outside his monastery for the exchange of spiritual insights. His feast day was established as July 11, the day his remains were transferred to another site within the monastery. His Rule was followed in France, England, and Germany, and when Charlemagne initiated a reform of monasticism in 814, he chose the Rule of St. Benedict to be imposed upon all monasteries within the empire.

O Glorious St. Benedict, sublime model of virtue, pure vessel of God's grace! Behold me humbly kneeling at your feet. I implore you in your loving kindness to pray for me before the throne of God. To you I have recourse in the dangers that daily surround me. Shield me against my selfishness and my indifference to God and to my neighbor. Inspire me to imitate you in all things. May your blessing be with me always, so that I may see and serve Christ in others and work for His kingdom. Graciously obtain for me from God those favors and graces which I need so much in the trials, miseries, and afflictions of life. Your heart was always full of love, compassion, and mercy toward those who were afflicted or troubled in any way. You never dismissed without consolation and assistance anyone who had recourse to you. I therefore invoke your powerful intercession, confident in the hope that you will hear my prayers and obtain for me the special grace and favor I earnestly implore (mention your favor). Help me, great St. Benedict, to live and die as a faithful child of God, to run in the sweetness of His loving will, and to attain the eternal happiness of heaven. Amen.